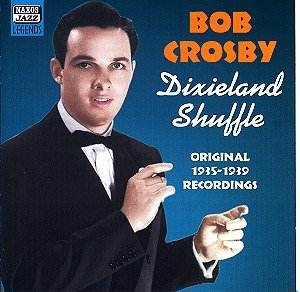 Born in Spokane, WA in 1913, he dropped out of college to pursue a musical career.  A very capable singer with good on stage charisma and wit, he performed as a big band singer from 1932-1935, and then was unexpectedly given the job of “leader” for a cooperative band made up of former members of the Ben Pollack Orchestra.

The Bob Crosby Orchestra developed a versatile stye, consisting of popular songs with Crosby providing the vocals, hard swinging cover tunes of the day (mostly arranged by Bob Haggart and Matty Matlock) and a dixieland style, played by a smaller group made up of members from the larger orchestra, sometimes known as Bob Crosby and the Bobcats.

The band was at it’s peak from about 1935-1942, featuring some outstanding soloists such as Billy Butterfield, Jess Stacy, Bob Zurke and Muggsy Spainer.  The band’s most famous recording was “South Rampart Street Parade“, but also recorded some really swingining versions of King Porter Stomp and Christopher Columbus.  The band was often featured on national radio and appeared in several movies, most notably providing some music for the movie Holiday Inn, which introudced the classic Christmas song “White Christmas“.  The band broke up in 1942 and Crosby served in the Marines from 1944-45.

After the war, Crosby stayed involved in music, show business and eventually television, often bringing back versions of the Bobcats for different occasions.  Crosby passed away in 1993.