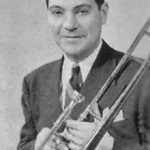 Jack Teagarden (1905-1964) was born in Vernon, Texas and was influenced by his family of musicians.  A fine trombonist and singer of the big band era, he was largely self taught and was considered one of the most innovative trombonist of the swing-era.

Due to a contract with the Paul Whiteman Orchestra from 1933-1938, Teagarden was late in establishing his own big band and never experienced commercial success with that band.  He played with many other bands, to include those of Louis Armstrong, Earl Hines and Eddie Condon.