My take on what is sometimes called “Blues Dancing”, by Mike Richardson (originally written Oct. 2013).

Additional comments (added Feb. 2015).  There has been some discussion in the Lindy Hop community about creating “safe dance spaces”.  Without getting into that discussion, I will say that one of the reasons the Hepcats do not promote “blues dancing” is the potential/likelihood for “blues dancing” to make a lot of people (mostly women) uncomfortable.

Note:  I reviewed the info below in October 2022 and still find it applicable.

I’m sometimes asked my opinion/views on what is sometimes called “blues dancing”.  As a general rule, I make it a point to not get involved with the drama and mini-controversies in dance communities.  It makes no difference to me the kind of dancing other people want to do; whatever dance people do, that’s their choice.  But perhaps it’s time for someone to bring some perspective and another point of view to “blues dancing”.  So here’s my two cents worth.

The image below pretty much sums it up for me.  However, if you would like to read more, see the info below. 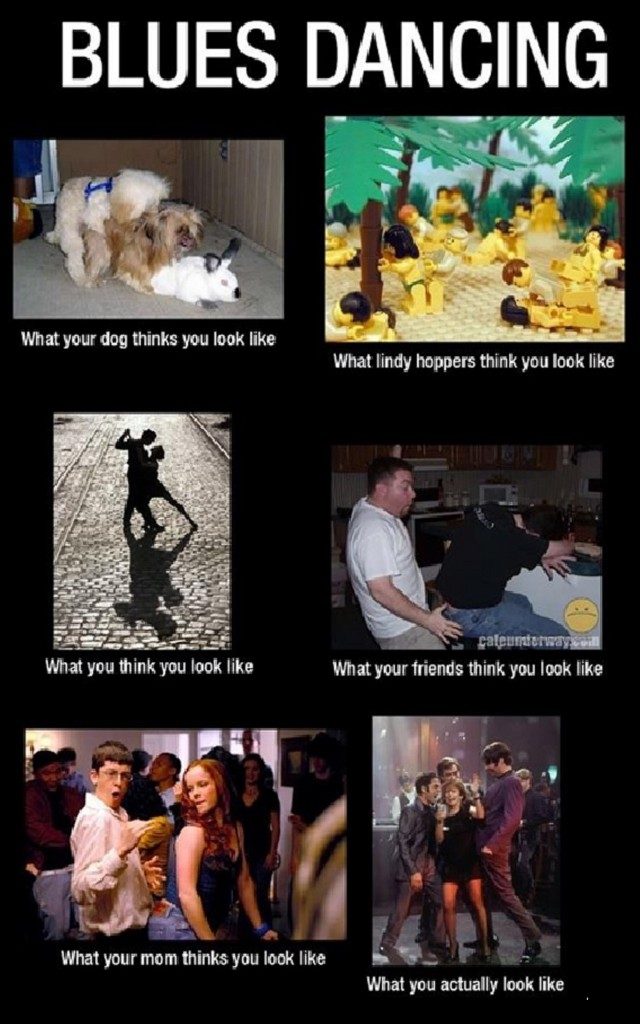 So, to continue………  When it comes to “blues” dancing, what I don’t like is when people take something that really isn’t a historical or documented swing dance, call it a “swing dance”, and then try to weave it into the fabric of Lindy Hop and swing music.  Lindy Hop, Balboa and Collegiate Shag are original swing dances that have a well-documented historical record, primary and secondary sources, and most important, videos.  The bottom line is that there really is no historical record for what is called “blues dancing”.  No doubt, people have been getting close to each other and moving to slow music for who knows how long.  It’s still done today in lots of places: bars, proms, weddings, class reunions, etc…. And of course there are events where people “blues dance” to what some people would call swing music.  But what is called “blues” dancing these days is not a swing dance (like Lindy Hop and Balboa), even if you do it to swing music.

From my experiences and observations, “blues” dancing is primarily bump and grind.  It’s really that simple.  I think a lot of the time it looks sleezy, and a lot of the leaders especially come across as creepy (take note leaders:  that’s what I’ve been told, and what Mary has been told, by a lot of followers, of all ages!).  Sure, there are a few exceptions:  good Lindy Hoppers with good technique can dance well to slow music.  But the vast majority of practitioners of “blues” dancing are just dancing bad to slow music, and most often dancing to bad slow music.

I also question the qualifications of many of the instructors I’ve seen advertised as featured instructors at “blues” events.  Since the concept of blues dancing is so easy, anybody can call themselves a “blues” instructor, as long as they can bump, grind and lunge with some flair and impress people that are easily impressed.  And since there really are no meaningful competitions for blues dancing, how can you differentiate that someone teaching “blues dancing” is really qualified?

It seems the national level instructors that consistently place at the top of competitions at events like Camp Hollywood, the All Balboa Weekend, International Lindy Hop Championships, Camp Jitterbug, etc… are not featured instructors at “blues dancing” events.  Instructors at “blues” events are most often instructors that really haven’t proven themselves in the Lindy Hop and Balboa communities.  In fact, I’ve seen a lot of “blues” events that prominently feature instructors whose backgrounds and primary interests are ballroom and west coast swing.

I think this emphasis on “blues dancing” is having an effect on Lindy Hop similar to what the ballroom dance establishment did to Lindy Hop back in the 1940’s.  A lot has been written on this subject, but to briefly summarize, the “dancing establishment” initially tried to ignore Lindy Hop, and swing dancing in general.  But by the early 1940’s ballroom dance studios could no longer ignore Lindy Hop and swing dancing:  it was just too popular (evidence the August 23, 1943 edition of Life magazine declaring the Lindy Hop as the “national dance”.)

So to please their less agile customers, the ballroom dance community took Lindy Hop, dummied it down by taking out the 5,6 (step, step), and made it circular instead of linear (no swingouts, just basically dancing in place).  They often still called it “Lindy Hop”, since most of their customers wouldn’t know the difference.

Just as the ballroom studios “dummied down” Lindy Hop in the 1940’s, “blues dancing” is having a similar “dummy down effect” on Lindy Hop and Balboa, as dancers have less and less technique, dance to slower music, etc….. I’m not saying that organizations that promote “blues” events are intentionally trying to harm Lindy Hop and Balboa, but that is the end result.

Look at how few Lindy Hop and Balboa workshops there are today compared to a few years ago (especially compared to exchanges).  And of those workshops, the number that are “blues” related means there are significantly fewer opportunities for someone to improve their Lindy Hop and/or Balboa.  The organizations/individuals sponsoring these “blues” workshops seem to take the easy road: offer some “blues” classes so everybody can feel good about themselves and think their dancing really is cool – – instead of offering great Lindy Hop and/or Balboa instruction so the swing dance scene can continue to grow and improve.

To build a quality swing dance scene for the long term, I think people want excitement, energy, great music and being able to dance with reasonably proficient dancers; and not the introverted, self-absorbing, narcissistic stuff you see with “blues” dancing.

Anyway, that’s my two cents, thanks for reading.